Minecraft's server software is single-threaded, meaning it must process all events in the world sequentially on a single CPU core. Even on the most powerful computers, a standard Minecraft server will struggle to keep up with over 200 players. Too many players attempting to load too much of the world will cause the server tick rate to plummet to unplayable levels. YouTuber SalC1 made a video talking about this issue which has garnered nearly a million views.

Back at the beginning of the 2020 quarantine I became interested in the idea of a supermassive Minecraft server, one with thousands of players unimpeded by lag. This was not possible at the time due to the limitations of Minecraft's server software, so I decided to build a way to share player load across multiple server processes. I named this project "Mammoth".

My first attempt involved slicing the world into 1024 block-wide segments which were "owned" by different servers. Areas near the borders were synchronized and ridden entities such as horses or boats would be transferred across servers. Here's a video on how it worked. This early version was deployed thanks to a server donation from BisectHosting and was tried by around 1000 unique players over a few months. This technique is no longer used; the Minecraft world is no longer sliced up by area.

It was a neat proof-of-concept, but it had some pretty serious issues. Players couldn't see each other across servers or interact. There was a jarring reconnect whenever crossing server borders. If one server was knocked offline, certain regions of the world became completely inaccessible. It had no way to mitigate lots of players in one area, meaning large-scale PvP was impossible. The experience simply wasn't great.

To actually solve the problem, something more robust was needed. I set the following goals:

To accomplish this, the world state needed to be stored in a central database and served to Minecraft servers as they popped in and out of existence. There also needed to be a message-passing backend that allowed player movement packets to be forwarded between servers for cross-server visibility.

While early versions of Mammoth used redis, I had some new requirements that my message passing and data storage backend needed:

I couldn't find any existing product with these qualities. I found incomplete attempts to use SpatialOS for Minecraft scaling, and I considered using it for this project. However, their license turned me off.

To meet these requirements, I started work on WorldQL. It's a real-time, scriptable spatial database built for multiplayer games. WorldQL can replace traditional game servers or be used to load balance existing ones.

If you're a game developer or this just sounds interesting to you, please be sure to join our Discord server. 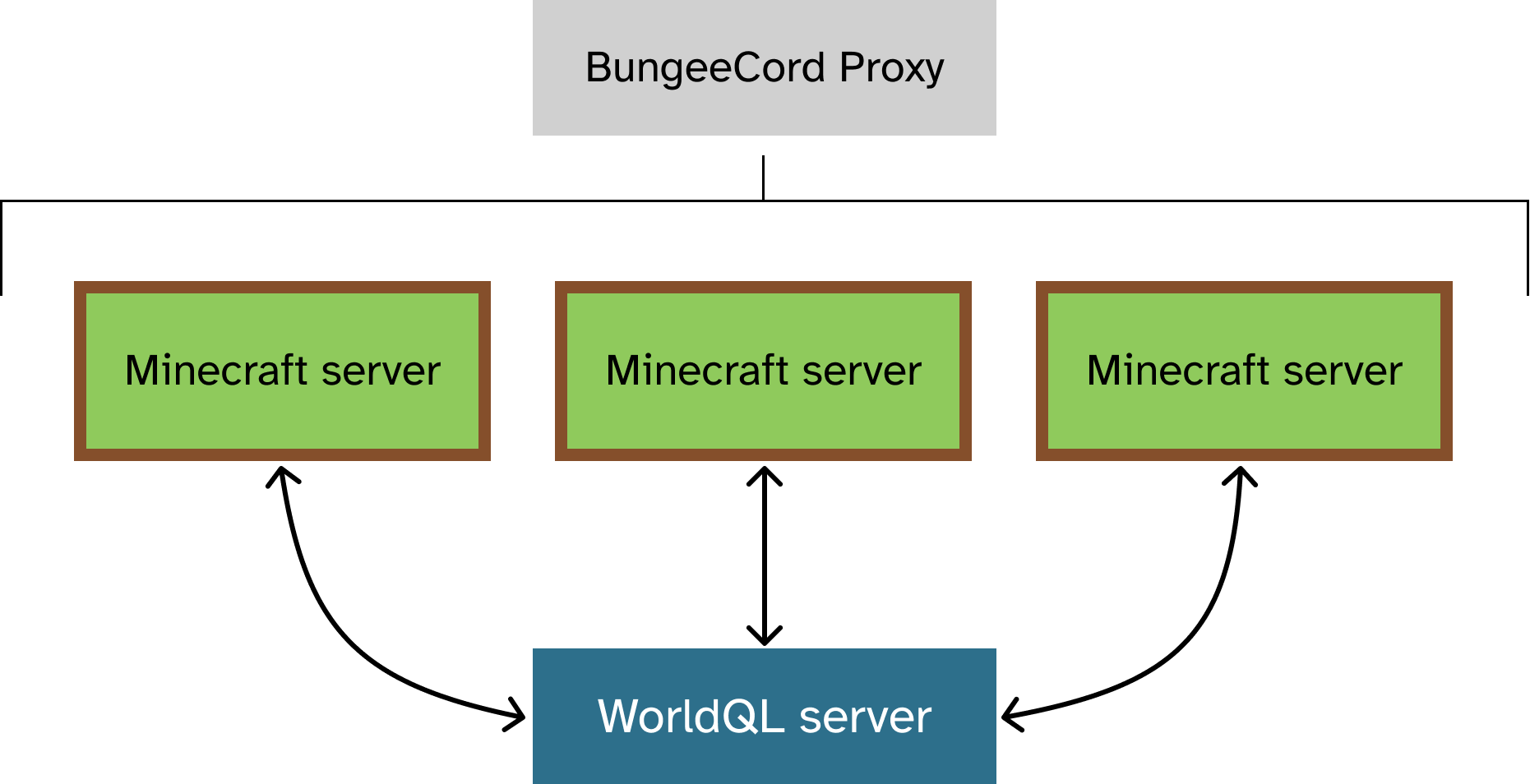 Here's a video demo showing two players viewing and punching each other, despite being on different servers!

The two Minecraft servers exchange real-time movement and combat events through WorldQL. For example, when Left Player moves in front of Right Player:

Part 2: Synchronizing blocks and the world #

Mammoth tracks the authoritative version of the Minecraft world using WorldQL Records, a data structure designed for permanent world alterations. In Mammoth, no single Minecraft server is responsible for storing the world. All block changes from the base seed are centrally stored in WorldQL. These changes are indexed by chunk coordinate and time, so a Minecraft server can request only the updates it needs since it last synced a chunk.

When a new Minecraft server is created, it "catches up" with the current version of the world. Prior to recording the video below, I built a cute desert home then completely deleted my Minecraft server's world files. It was able to quickly sync the world from WorldQL. Normally this happens automatically, but I triggered it using Mammoth's /refreshworld command so I can show you.

This feature allows a Minecraft server to dynamically auto-scale; server instances can be created and destroyed to match demand.

These simulated players are created by a loopback process which:

This stress test results in the player seeing a wall of copycats:

Mammoth pushes Minecraft server performance further than ever and will enable entirely new massively-multiplayer experiences. Keep in mind this demo exists only to show off the efficiency of the message broker and packet code, this is not as stressing as 1000 real players connecting. Stay tuned for a demo featuring actual human player load.

Powered by the V8 JavaScript engine, WorldQL's scripting environment allows you to develop Minecraft mini-games without compiling your own server plugin. This means you don't have to restart or reload your server with every code change, allowing you to develop fast.

As an added bonus, every Minecraft mini-game you write will be scalable across multiple servers, just like our "vanilla" experience.

The process of developing Minecraft mini-games using WorldQL is very similar to using WorldQL to develop multiplayer for stand-alone titles. If you're interesting in trying it out when it's ready, be sure to join our Discord to get updates first.

Thanks for reading this article! Feel free to check out our GitHub repository for the Mammoth Minecraft server plugin and join WorldQL's Discord!